Warning: Parameter 2 to WPE\Site_Preview::the_posts() expected to be a reference, value given in /home/customer/www/goexplorenature.com/public_html/wp-includes/class-wp-hook.php on line 303
 Tidepool Discoveries at Point Fermin State Marine Park - GoExploreNature.com

Ever since the debacle learning experience we had when we showed up at Leo Carillo State Park during high tide instead of low, I’ve been itching to visit a Southern California tide pool with the big explorer.

The first week of summer break seemed like the perfect opportunity. When a check of the tide charts for Point Fermin State Marine Park in San Pedro showed a midday low tide, I was in. We invited along some friends to sweeten the deal.

And what an adventure we had! 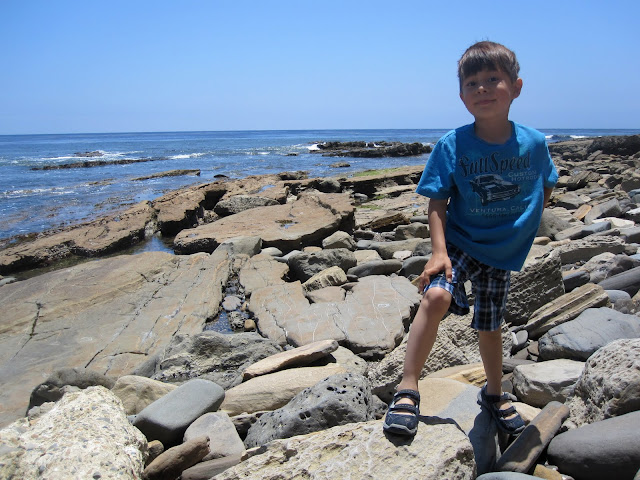 WHY IT’S GREAT FOR NATURE LOVERS
Tidepools are formed by depressions in the rocks that trap water as the tide goes out. The best time to visit Point Fermin (or any tidepool area) is at low tide, when most of the rocks and pools are exposed. During our visit, we saw tons of sea crabs, chitons, mussels, sea urchin shells, seaweed and more. For free!

The best way to explore is to take your time. Instead of running from one pool to the next, pick one area, have a seat and take a look for a few minutes to see what you can find. We were amazed at how exciting tidepool discoveries are for kids and parents alike.

OUR NOTES FROM THE FIELD
The path from the Cabrillo Beach Park to the tidepools is a short, flat walk, but once we got there, we realized we were in for some serious rock hopping to reach the pools. 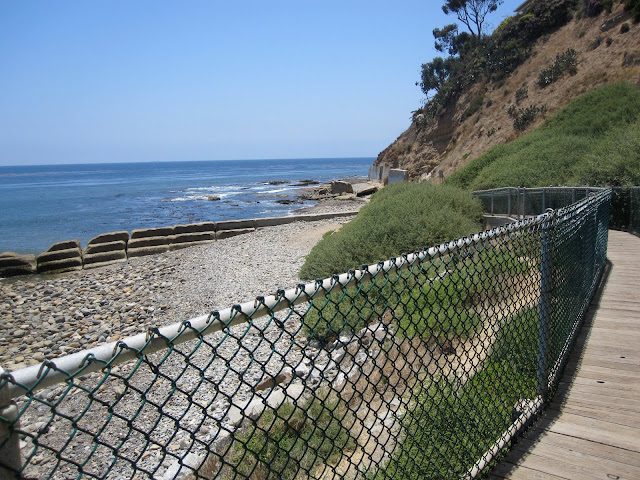 It took us a few minutes to get used to maneuvering, but once we did, we moved quickly. As soon as we reached an area with some water in it, I told the big explorer to stop and take a close look to see what he could see. He went crazy with excitement! 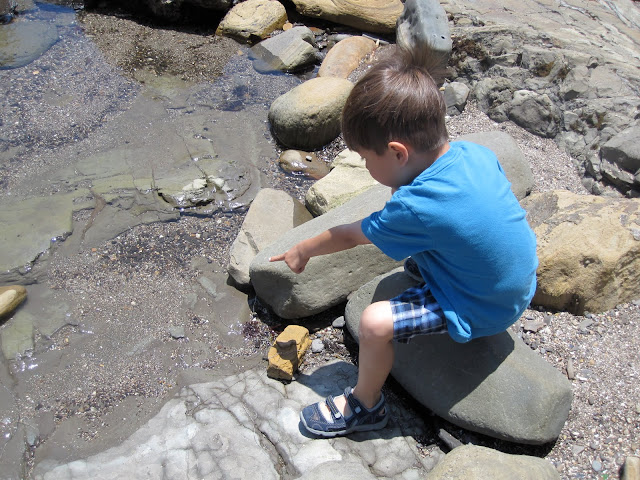 Funny thing is, his first few discoveries were empty shells and plants he thought looked pretty. Once his buddy spotted a crab (and there were TONS of them!), the two couldn’t be contained. They pointed at every one they saw – some moving, some hiding in their shells, baby crabs, huge ones, some out of the water and others swimming inside it. 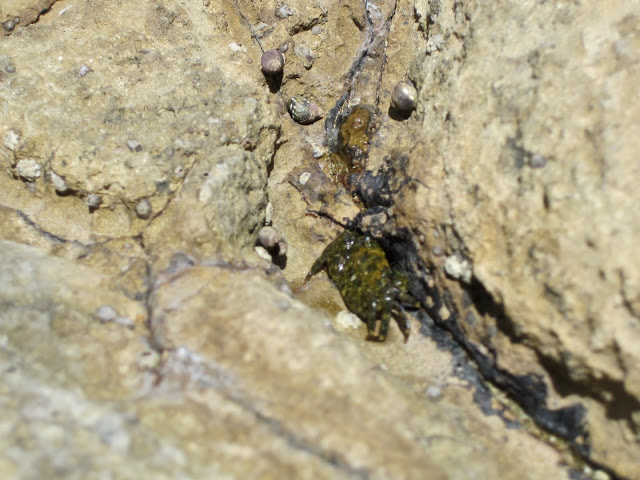 There was so much to discover. We spotted a chiton, which we’d read about in my treasured copy of the classic The Wonder Book of the Seashore. 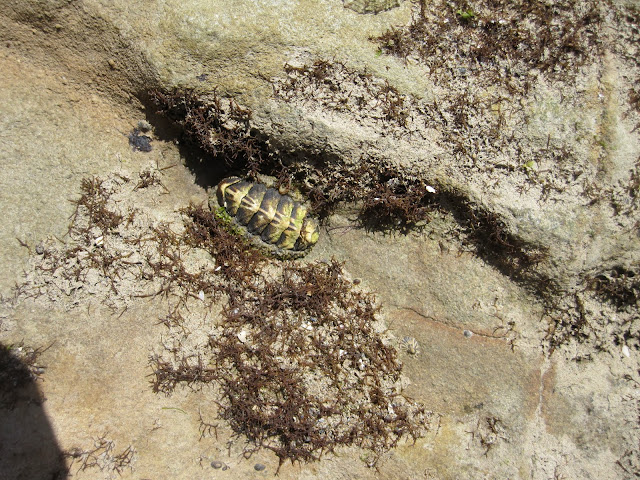 We spotted this beautiful sea urchin shell, which was especially cool because it still had some of its spines attached. 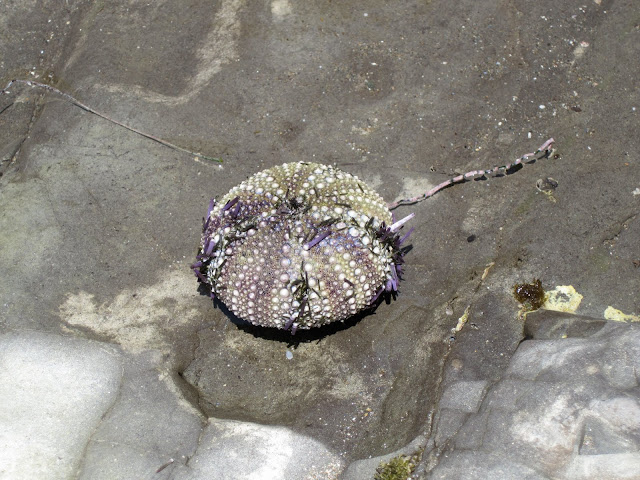 The big explorer even remarked about how pretty this seaweed looked in the water. I agree – it’s rare for us to see seaweed that isn’t brown and washed up on the shore! 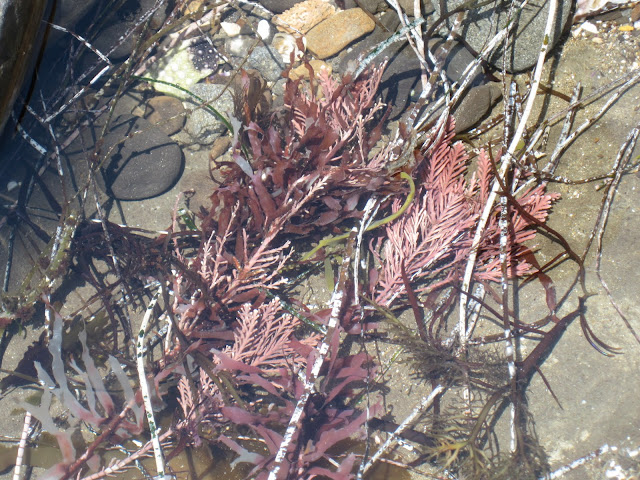 We saw lots of abandoned shells that were now being used by new creatures, which was the perfect opportunity to talk about nature’s own method of recycling. The kids were quick to point out that anything they found in the water should stay there because some creature might want to reuse it.

We explored for almost an hour moving from one pool to another, taking care to stop and peek inside to see what we could discover in each one.

When it was time to head back to shore, the kids asked if they could search for shells. Anything out of the water was fine with me. The big explorer found several beauties to add to his collection of nature treasures, but this was his favorite. 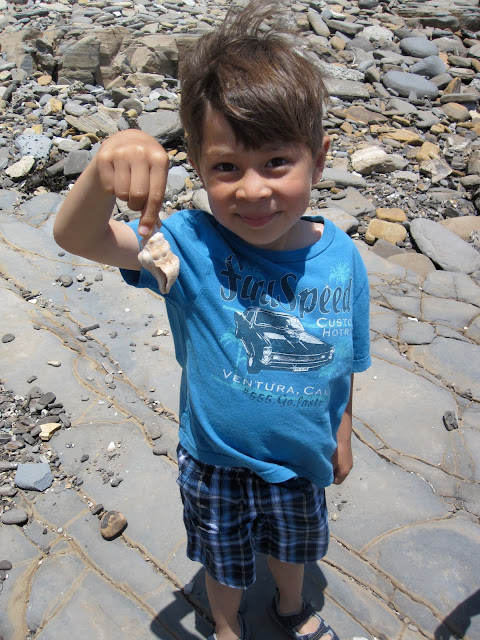 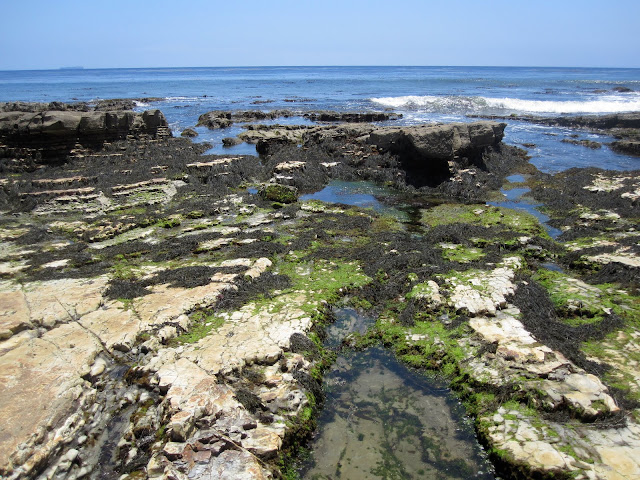 MY TIPS FOR A GREAT VISIT