Warning: Parameter 2 to WPE\Site_Preview::the_posts() expected to be a reference, value given in /home/customer/www/goexplorenature.com/public_html/wp-includes/class-wp-hook.php on line 307
 Fun Friday: Catch a Rainbow - GoExploreNature.com

Fun Friday activities are quick-and-simple ways to explore nature in your own backyard.

THE IDEA: Delight in the magic of a rainbow with your kids.

Okay, so you can’t really plan this one. But that’s what makes it so special.

The next time you’re lucky enough to witness a rainbow (which should be soon now that the rainy weather is on it’s way), sit back, relax and take a moment to really enjoy it.

OUR NOTES FROM THE FIELD
The weather in Los Angeles this week has been extreme to say the least. We’ve had record heat with almost no let up in sight. Imagine our excitement when we spotted this gorgeous rainbow one evening during our after-dinner stroll. 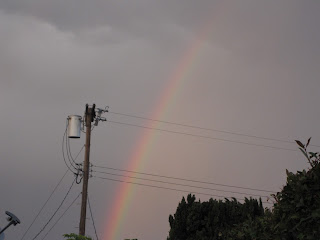 At first, none of us could stop staring. I later discovered that this was actually a double rainbow. (I’m guessing by the time we saw it, one of the two rainbows had already faded from view.) No wonder it felt like it filled the entire sky.

After gawking for a while, we decided to continue on with our walk. We were amazed to see this amazing sun set in the sky opposite the rainbow. Wowza! 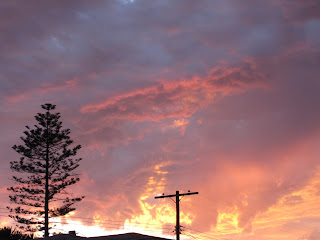 I figured the spectacular display would fade before we finished our walk, but things just kept getting better. The big explorer found two separate spiders spinning their webs seemingly “in the air,” each with a beautiful scene behind them. 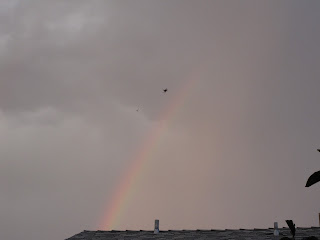 No matter where we looked, the sky was putting on a spectacular show.

The little explorer ran from one house to the next asking, “where’s the rainbow” until he found it again. As we approached our house, he finally dropped down in the grass and simply stared up, taking it all in.

One final glance at the slowly fading rainbow as the night sky turned a beautiful shade of pink. 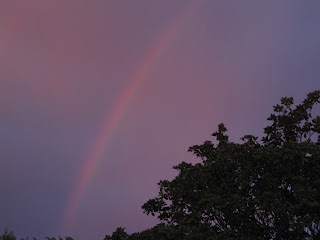 And then it was gone.

For a while we talked about how glorious it was. How thankful we were that we’d decided to come out for a walk (the big explorer had put up a quite a stink about doing so just before we left the house).

Imagine what we would have missed if we’d stayed inside.

MORE IDEAS FOR OUTDOOR FUN
I admit it: Fall is my favorite season for enjoying the great outdoors. The (normally) moderate temperatures and changing landscape make time outside refreshing and inspiring. Here are a few creative ways you might want to enjoy nature this week:

What outdoor fun do you have on tap for this first weekend in October?