Warning: Parameter 2 to WPE\Site_Preview::the_posts() expected to be a reference, value given in /home/customer/www/goexplorenature.com/public_html/wp-includes/class-wp-hook.php on line 303
 Exploring McArthur-Burney Falls Memorial State Park With Kids - GoExploreNature.com 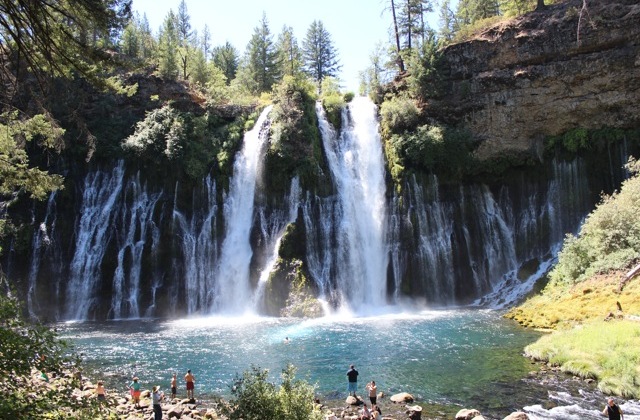 McArthur-Burney Falls Memorial State Park certainly isn’t easy to get to. It sits on the eastern edge of the Cascade Range, between Mount Shasta and Lassen Peak.

The park’s centerpiece is the 129-foot Burney Falls, once proclaimed by President Theodore Roosevelt as “the eighth wonder of the world.” Burney Falls isn’t the highest or largest waterfall in the state, but it’s arguably the most spectacular.

Why? Because the water isn’t just flowing from the creek that feeds it from above. It’s actually flowing through the surface of the rocks behind, fed by an underground river. Which makes it ultra wide and produces a flow of some 100 million gallons of water a day, year round.

During the few hours we had slated to spend in the park, we planned on hiking the Fall Loop Trail. But once we got to the base of the falls, the kids wanted to climb on the rocks down to the waters’ edge. Change in plans.

The hike: Follow Falls Trail past the first lookout point. The trail is paved for a couple hundred yards with a few switchbacks down toward the falls. A few tips for visiting with kids:

For more on our 2012 Northern California road trip adventures, check out: